The old fellow of Anzhou has a mind as resolute as iron
But still manages to retain the tongue of a child.
He will not touch the five grains, but eats only honey:
Smiling, he points to the bees and calls them his "doners"!
The honey he eats contains a poetry men do not understand:
But the myriad flowers and grasses vie to transport it.
The old fellow sips and savors and then spits out poems,
Poems designed to entice the ill "children" of the world.
When the children taste his poems, it is like tasting honey,
And that honey is a cure for the hundred ills.
Just when they are madly rushing about grasping at straws,
Smiling, they read his poems and all their cares vanish!
Master Dongpo has always treated others with fairness
But still there are some who like him and some who don't!
Like a tea that some find bitter and other sweet,
And unlike honey, which tastes sweet to everyone.
So, Sir, I am sending you a round cake of Double Dragon tea:
Which, if held up to a mirror, will reflect the two dragons.
Though Wu during the sixth month is as hot as boiling water,
This old man's mind is as cool as the Double Dragon Well! 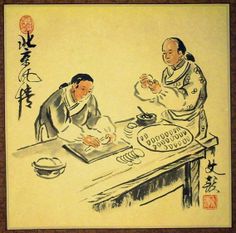